Loss of Control: Is Economic Collapse Near?

The following article by Bill Holter presents some interesting ideas around why the collapse that many have been anticipating for the past few years has yet to occur. This comes on the heels of the CME announcing a $400 wide gold circuit breaker yesterday, banks sneaking legislation into the budget that puts the U.S. taxpayers on the hook for over $300 trillion in derivatives and the oil price falling by over 40% in the past three months. The country is engulfed is protests from coast to coast and we are pushing ever closer to the brink of war with a nuclear-armed Russia. The markets closed sharply lower today, with the major indices doubling their losses in the last hour of trading. 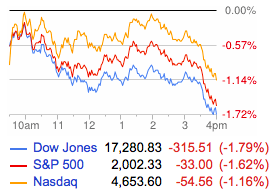 Could a major economic collapse finally be on the doorstep or have the doomsayers got it wrong again? Would a deflationary collapse be bullish or bearish for gold? Read more below…

Bill Holter: Many who will read this work have been sitting patiently waiting for the house of cards to collapse.  For me personally, I confess the current maniacal financial bubble has gone on much longer than I ever imagined.  What did we miss?  Are we wrong or just early?  In my opinion, we were early, mathematically correct yet the “rules” changed.  For my part, I can say that I missed just how much “leverage” could be used to extend the game.  In the current instance, we are not even talking about garden variety leverage.  We live in a world where leverage is leveraged, leveraged again and again and again.  We have personal, public and “private” (OTC) leverage. The garden variety leverage is bad enough as is sovereign leverage, but the real problem are derivatives piled on top of derivatives with collateral which in many cases no longer even exists.  Too much leverage in the past has always led to burst bubbles.  All bubbles eventually burst …and it looks like this one is bursting now.

While I originally thought about talking of Venezuela and Ukraine today, and making a comparison and wondering which one will bankrupt first, it dawned on me …the current bubble is busting right now!  From a big picture standpoint, the Fed was forced to stop QE because they were taking too much collateral from the system.  The baton was then passed to Japan because the Germans said “nien” to the ECB.  QE3 started in Sept. 2012 …which is exactly the point in time where the world of asset valuations was turned further upside down.  Call these last two years the “last gasp” or whatever you’d like, the world does not have the ability to reflate any further and in fact, the “bubble of all bubbles” looks to be deflating piece by piece, let me explain this.

Oil is arguably the most important commodity on the planet from a financial standpoint.  Oil has collapsed in price by over 40% in less than 3 months.  There are many repercussions from this, oil exporting nations are watching as their coffers run dry and  the economic activity from lower prices means lower individual employment.  From a financial standpoint the oil derivatives outstanding have already killed someone (we just don’t know who yet) and the “underpinning” of the dollar has been weakened.  My last point needs an explanation.  The dollar is otherwise known as the “petrodollar” because petro revenues have been for years recycled back into dollar assets, lower oil revenues means lower recycling.  This action had already begun while oil was still over $100 per barrel as less demand for dollar assets was evident.  Now, on top of less “willingness” on the part of petroleum exporters to recycle, they have less (or none) to recycle.  No problem because the Fed will just monetize you say?  Think again!

Look what is currently happening.  The reflation of the reflation of U.S. real estate is failing.  Oil has deflated 40%+++.  High yield credit is in an outright crash and already at record “wides” to Treasuries.  The euro and yen have deflated drastically …even against gold.  The Chinese stock market dropped over 5% last night, this is like a 900 point drop in the Dow.  They changed their “collateral rules” and now only AAA and AA credits can be used as collateral.  While speaking of China, let’s not forget their shadow banking system which has basically now been frozen solid.  Commodities across the board have been hammered lower while growth rates across the globe (except of course the U.S. as we lie about every economic report) have either slowed drastically or turned negative.  The “reflation” is clearly failing!  There is no way around it, we are watching a credit contraction unfold.

Yet, gold has bottomed?  How could this be?  Gold surely should be close to or even under $1,000 if you listen to the Dent’s and Armstrong’s of the world?  Let me put this together for you.  Everything is “controlled”.  By “controlled” I mean “price.”  The price of everything is controlled.  I could have said “hidden.”  The “hiding” process began in 2008-09 when the Fed took all sorts of toxic (insolvent) paper on to their balance sheet.  They did this to hide their values.  Yes, they did this to get liquidity into the banks but in my mind their primary reason was to get these assets off the market so they could not be used as “comps” are in real estate.  They carry these on their books at par when they could not even get .18 cents on the dollar when they tried to sell them.  Do you see?  This is where the scheme kicked into high gear.

Back to gold, how could it possibly be going higher if all of a sudden asset values are declining or deflating?  First, gold has also been “priced”.  Gold, more than any other asset (except silver) HAD to be “priced.”  It had to be suppressed because the numbers on the thermometer had to be altered to foster confidence.  As you know, I absolutely believe gold’s price has been “made” on the paper markets.  Nothing else could explain a falling price with increasing and greater demand than supply.  If other markets are being lost control of, then so are gold and silver, they are only moving away from being controlled and towards a natural price.

It looks like to me that “confidence” if it is not broken yet, will very soon because control is being lost in too many of these markets.  Was the price drop in oil a “control” measure by the U.S. to punish Russia?  I believe yes, this was “our” plan but not “THE” plan.  As I wrote a week ago, we may have thought it was our bright idea but I am sure the new Chinese/Saudi relations are as big of a factor, if not greater.  Because so many different markets now begin to tell a story opposite of the “official” story, it tells me that “control” is now beginning to slip.  If you doubt this, think to yourself ”why have we had extraordinary measures” for six years?  Why are we still six years later talking about recovery?  What happened to the “expansion” phase?  It’s like the Dutch boy with all of his fingers and toes in the dike, leaks are springing up everywhere and with each one more control is lost!  If I am correct and this is true then we will either see massively convulsive markets or an outright closure and re set of prices.

Quite simply, we have lived through the greatest Ponzi scheme of all time where leverage of over 100 to (probably 1,000 to one when all is said and done) has been employed for control.  The recent volatility suggests that control is finally being lost.  If this is true and I firmly believe it is, we are on the doorstep of the worst financial panic event in all of human history.  The sad part is the humanity.  Only a small percentage of the global population ever even played in this game but everyone will be affected by it!