Our ‘miner spotlights’ will periodically highlight mining companies with significant news such as high-grade drill results, the release of economic studies, takeover rumors, insider buying or other events. This will allow subscribers the opportunity to perform their own due diligence and potentially identify mining stocks at the start of a new major uptrend. We never accept compensation to write about mining stocks. To view the GSB portfolio and see which stocks we believe have the greatest upside potential, sign up for a 3-month trial of the Gold Stock Bull Premium Membership at just $95.

Aurcana Corp was an early favorite of mine and the stock had some nice runs throughout the past decade, but has suffered lately. Many i

nvestors had questioned the honesty and integrity of their previous President and CEO, Lenic Rodriguez, who was replaced in July of this year. He remains on the Board of Directors.

The company reported resources incorrectly and admitted their numbers were inflated due to using flawed resource modeling. They promised an updated resource estimate in January of 2014, but I can’t find a press release with updated/corrected resource estimates. The last it was mentioned was in December of 2013, with the following statement:

Adding to the woes of Aurcana, the most exciting aspect of the company, their new Shafter project in Texas, was put into care and maintenance in December of 2013. Sure, the lower silver price contributed to the decision, but I believe there was a good deal of mismanagement occurring and the company has been really poor at managing investor expectations.

Aurcana also had a protracted legal battle with Sprott and a class-action lawsuit filed on behalf of shareholders. It has been anything but clear sailing for the company over the past 5 years.

Yet, despite all of the headaches, Aurcana has managed to consistently grow production at their La Negra mine. Just yesterday they reported record quarterly production during Q3 of 997,530 ounces silver equivalent. This compares to 754,828 in Q3 2013, an increase of 32%.

Mr. Kevin Drover, Aurcana’s President & CEO, said, ”We have made large strides in mining higher grade material at La Negra, while significantly reducing costs. We are on track to achieve our production goals of between 3.5 and 4.0 million ounces of silver equivalent for 2014.”

3.5 to 4 million eq ounce of silver is a substantial amount for a company with a market cap under $30 million. It is also a nice increase from the 2.9 million eq ounces they reported in 2013.

Significant progress at the La Negra Mine has been made in the areas of safety, production and costs.

The safety performance of the site continues to improve and lost time accidents (LTA) have been reduced from an average of 12 per quarter over the past six quarters to 2 LTA’s in the 3rd quarter.

Production, as indicated above, has steadily improved over the quarter, mainly due to better grade control, mining of higher grade areas of the mine and better dilution control.

Shares of Aurcana are currently trading at $0.35, giving the company a market cap of just $29 million. This is down from a share price of $3.09 in August of last year and the February 2014 high of $1.49.  The current share price is also 36% below the price investors paid during the equity financing in June. We have yet to see Q3 financials, but with record production, we should expect decent cash flow. Lower silver prices obviously will not help matters and Aurcana’s cash costs have been rising in recent quarters. But at the current production rate, Aurcana could by generating over 4 million silver eq ounces next year from La Negra alone. If silver prices start rising again and Aurcana’s profit margin rocket higher, the share price is likely to follow.

Of course, none of this takes into account their 100% owned Shafter project in Texas. While operations are currently suspended, Aurcana spent over $20 million to acquire this property from Silver Standard and millions more moving it into production. The last resource estimate returned roughly 20 million proven and probable ounces of silver with another 20 million inferred ounces. The 2010 feasibility study was economic with an IRR of 43% and NPV of $53 million at $17 silver. We now know the resource numbers were inflated and the economics will be impacted, but they provide some color to the scale and potential of the project.

Shafter was expected to produce 3.8 million ounces of silver in the first year of production. If/when Aurcana takes Shafter out of ‘care and maintenance’ and puts the mine into production, it could potentially double their production. I assume it will take silver prices back above $20 before this occurs and we still don’t know how far off the 3.8 million ounce estimate might be, but the market is assigning little to no value to Shafter at the moment. And while Aurcana had its share of issues with Shafter, investors might gain encouragement from the company’s ability to consistently grow production at La Negra.

The chart for Aurcana is not pretty. The share price has been steadily declining over the past few years, from around $7 to under $0.30. But shares were up 6% yesterday and another 6% today. Also, the RSI has recently bounced from oversold territory and is pointing higher. 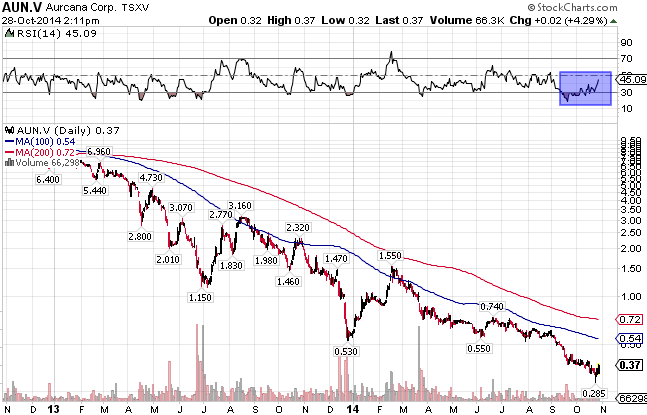 Could we have seen the bottom for Aurcana? With record production in the latest quarter, a new President and CEO, recent financing and the potential to restart Shafter and double production, perhaps Aurcana is offering investors value with a share price of just $0.35 and market cap around $30 million? I personally want to wait for Q3 financials to be released before considering buying shares, but will keep an eye on the stock moving forward.

What do you think dear readers? Is Aurcana a buy at current prices? Do you think they have a bright future?