Miner Spotlight: B2Gold Bounces 12% After Securing Funding for Fekola Mine

Gold Stock Bull ‘miner spotlights’ will periodically highlight mining companies with significant news such as high-grade drill results, the release of economic studies, takeover rumors, insider buying or other events. This will allow subscribers the opportunity to perform their own due diligence and potentially identify mining stocks at the start of a new major uptrend. To view the GSB portfolio and see which stocks we believe have the greatest upside potential, sign up for a 3-month trial of the Gold Stock Bull Premium Membership at just $95

B2Gold Corp (NYSE: BTG or TSE: BTO) bounced 8% today and another 4% in after-hours trading, following an announcement that they have secured funding for the construction of the Fekola Project.

B2Gold is a Vancouver-based gold producer with four mines (two in Nicaragua, one in the Philippines and one in Namibia) and one mine under construction in Mali. The company produced 493k ounces of gold in 2015, an increase of 28% compared to 2014. But this growth story is just getting started. Based on current assumptions, they are projecting gold production in 2016 in the 510k to 550k ounces range, which I think is a conservative projection in order to under-promise and over-deliver. Production is forecasted to increase significantly to between 800,000 to 850,000 ounces in 2018.

B2Gold has four producing mines, including the Otjikoto Mine, which commenced commercial production a little over a year ago. This mine was put into production on budget and ahead of schedule, which makes me optimistic about their ability to move their next mine (Fekola in Mali) into production in similar fashion. B2Gold successfully completed a mill expansion (on time and budget) at Otjikoto in September, from 2.5 million tonnes per year to 3.0 million tonnes per year.

Indeed, Clive Johnson, B2Gold management and technical teams have proven success, formerly with Bema Gold Corporation (sold to Kinross for $3.5 billion). They have demonstrated the ability to discover, finance, build and operate profitable gold mines around the world. Construction of the Fekola mine is well underway and the company expected initial production in late 2017.

This deal to finance Fekola was done on attractive terms without a dilutive equity financing. It includes approval for Gold Prepaid Sales Financing Arrangements of up to $120 million, a signed commitment letter to enter into a Euro equivalent of $81 million term mining equipment facility and an increase in the size of the Otjikoto equipment loan facility.

Initial prepaid sales contracts have been entered into for the delivery of approximately 43,100 ounces of gold in each of 2017 and 2018, for total cash prepaid of $100 million. The number of ounces to be delivered was based on an average forward price of $1,248 per ounce of gold.  While I don’t usually like a company hedging production, the ounces to be delivered represent only around 7% and 5% of forecast consolidated gold production in 2017 and 2018 respectively.

Fekola was purchased acquired from Papillon Resources in a $570 million all-stock deal in 2014. The mine is expected to produce an average of 276,000 ounces per year through the 12.5 year projected mine life. During the first seven years, production is expected to average 350,000 ounces of gold. The economics are robust, with a NPV pre-tax of $1.01 billion at a 5% discount rate generating a pre-tax internal rate of return (“IRR”) of 34%.

The Fekola resource is still expanding with recent drill results up to 4.77 g/t gold over 45.4 metres and a new zone found near Kiaka where drill results are up to 2.21 g/t gold over 106 meters. The company has budgeted for 43,000 meters of drilling in 2016.

The chart shows the long-term downtrend and recent v-shaped bounce from $0.60 to $1.43. The stock has recently closed above the 200-day moving average for the first time in nearly two years. I think there is plenty of upside ahead for B2Gold, but I am inclined to wait for a dip towards $1.oo before picking up shares. The RSI is currently near overbought levels and I think gold and gold stocks are due for a small pullback before charging higher. 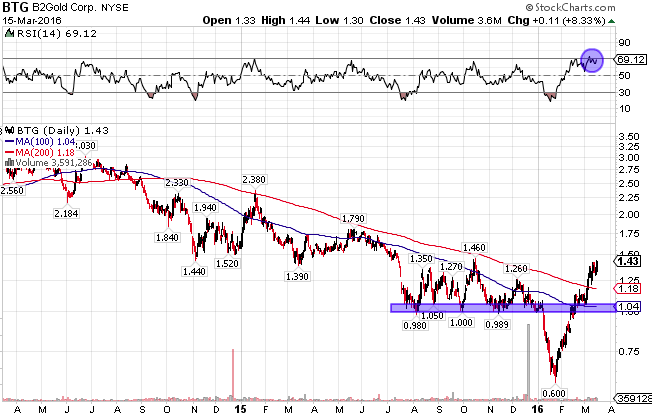 Over the course of the next 12-24 months, I expect the gold price to climb back towards $2,000 per ounce and have a price target for B2Gold shares of $7.00 during such a move. I think the high grades, low costs, rapid production growth and strong management team will all contribute to B2Gold outperforming its peers over the next few years. I do not currently hold a position, but plan to buy on any dip into the US $1.00 to $1.20 range.

B2Gold faces risks similar to any miner moving a new project into production. They will need to reach commercial production on time and on budget, while delivering metrics in the ball park of their feasibility study. They also need the gold price to consolidate recent gains and ideally continue moving higher in order to see robust margins and a share price that charges higher towards our lofty target.

To get all of our stock picks, view the GSB portfolio, receive the monthly newsletter and get our weekly trade alerts, click here to become a premium member. It is only $95 to get started and you can request a full refund if you are not 100% satisfied.