Our ‘miner spotlights’ will periodically highlight mining companies with significant news such as high-grade drill results, the release of economic studies, takeover rumors, insider buying or other events. This will allow subscribers the opportunity to perform their own due diligence and potentially identify mining stocks at the start of a new major uptrend. We never accept compensation to write about mining stocks. To view the GSB portfolio and see which stocks we believe have the greatest upside potential, sign up for a 3-month trial of the Gold Stock Bull Premium Membership at just $95.

Banro Corp (NYSEMKT:BAA) is a Canadian gold company with production from its first gold project, Twangiza, which is located in the Democratic Republic of the Congo. Banro is also focused on the development of its second open pit project Namoya and is undertaking exploration on two further fully permitted and licensed projects, Kamituga and Lugushwa.

Banro’s Twangiza oxide mine began production in October 2011 and is projected to produce approximately 100,000 ounces of gold per year with plant modifications increasing production in 2014. Led by a proven management team with extensive gold and African experience, Banro’s business model is to focus on the substantial and open pit-able oxide resources it has delineated to date. Banro has identified 2.36 million ounces of Mineral Reserves (Proven & Probable), 8.35 million ounces of Measured and Indicated Resources, plus Inferred Resources of 5.32 million ounces along this highly-prospective gold belt. 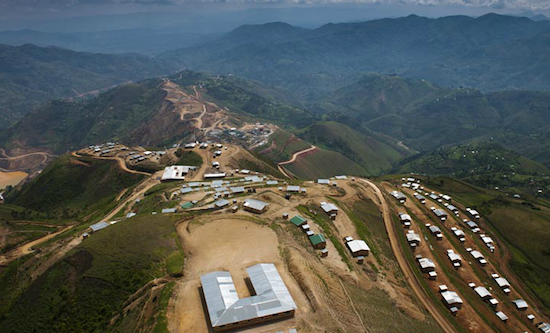 Banro ticks most of the boxes when looking for a winning junior mining stock:

Ability to Raise Capital / Institution Ownership: Banro today declared that it has developed a comprehensive financing plan to stabilize the financial condition of the Company and secure the funds required to achieve full production capacity at its Namoya mine. The financing plan includes the closing of a US$35.5 million liquidity backstop facility today with investment funds managed by Gramercy Funds Management LLC, and the signing of a memorandum of understanding with a private gold group for a US$41 million gold forward sale and a US$80 million gold streaming transaction.

In addition, has an impressive list of major shareholders that have invested in the future success of the company. In addition to some of the regular gold-focused funds, we also see some of the larger banks and more general funds wanting a piece of the action. 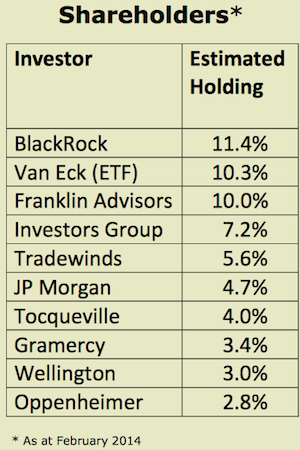 Banro touts the DRC (Democratic Republic of Congo) as a safe place to do business, saying: In 2003, the DRC implemented a new mining code with the support of the World Bank. This has led to a revival of interest in the country by several major and junior international mining and exploration companies. Meanwhile, World Bank, IMF, USAID, and Paris Club, as well as the European Union and South Africa, have committed billions of dollars to social and economic recovery in the country. In 2006, the country held its first democratic elections in over 40 years, electing Joseph Kabila to the position of President and electing a new Parliament and new state governors and legislatures.

Yet, one must acknowledge the geopolitical risk of doing business in the DRC. The Congo has been at the centre of what some observers call “Africa’s world war”. This has left it in the grip of a humanitarian crisis. The five-year conflict pitted government forces, supported by Angola, Namibia and Zimbabwe, against rebels backed by Uganda and Rwanda. It has had a recurring UN peacekeeping presence since independence in 1960 and less than 2,000 miles of paved road. The D.R.C.’s poverty, infrastructure deficits, and other development benchmarks are among the worst in the world. The Congo is ranked last – number 187 – on the United Nations Develop Program’s Human Development Index. Instead of peace and prosperity, the Congolese have been plagued by decades of mismanagement, corruption, poor governance, and recurring civil strife. These problems, as the proliferation of foreign armies, rebel groups, ethnic violence, and arms trafficking, and illicit mining, have exacted a horrifying toll on the D.R.C. and its people.

The international community has invested huge sums of money into the D.R.C. over many years with sometimes little to show for it. Since 1998, more than five million people have died in the D.R.C. as a result of violence.  Fighting was fuelled by the country’s vast mineral wealth, with all sides taking advantage of the anarchy to plunder natural resources, and some small militias fight on. In early 2013 the UN secured a regional agreement to end the M23 rebellion in eastern areas, and the group’s alleged founder Bosco Ntaganda surrendered to the International Criminal Court to face war-crimes charges. Rwanda and Uganda denied UN accusations that they had supported the M23 group, but the region remains volatile.

So, while management tries to put a friendly spin on some of the development in the DRC, it remains a relatively risk place to do business. Furthermore, Banro Corp has had a horrendous few years, with the stock falling over 90% from its 2012 high.

The company currently has a market cap of around $60 million. At first blush, this seems incredibly low for a mining company that is expected to produce more than 150,000 ounces of gold in 2014 at low costs. However, they are also straddled with $250 million in debt, mostly from brining their Namoya project into production. 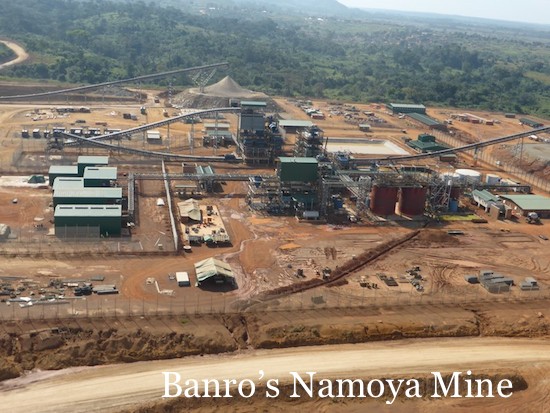 The technical chart shows the painful decline over the past few years and recent pop higher after the financing news. Shares are up 16% today, after climbing over 20% at one point. This gain is coming on more than 10X average volume, which is bullish. The RSI is pointing higher with room to run. Yet the price dropped below trend line support in July and has yet to climb back above this line.  It also remains far below both the 100-day and 200-day moving averages. 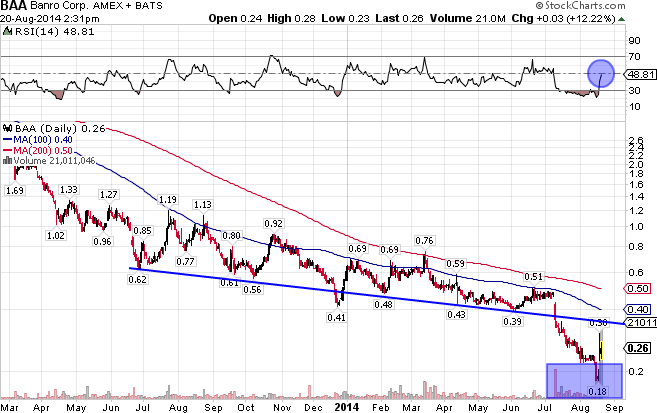 I like Banro Corp and believe they have a bright future as their Namoya mine moves into commercial production. With the potential to double production this year at high grade/low costs mines, it is hard to imagine the price remaining this low for much longer.

However, I am not a buyer at this point and prefer to wait and see how the market digests the financing news over the next few days. We are likely to get some profit taking after the huge bounce today and I’d rather not be the one supplying those profits to earlier speculators. We are likely to get a better entry point in the coming weeks, especially if gold is unable to break out decisively. But Banro is definitely one to keep on the radar as they release Q3 and Q4 production numbers. Even including their debt, the stock looks undervalued around current levels and the upside potential is huge if gold is able to break back towards previous highs over the next 12 months.

To find out which stocks we hold in the Gold Stock Bull Portfolio and which companies we believe will outperform during the next move higher in precious metals, click here to become a Premium Member.

Disclosure: I have no positions in Banro Corp at this time, but may look to acquire a position in the near future.  I was not paid to write this article.