The following chart shows the performance of mining stocks (XAU) versus the broader stock market (S&P 500). This comparison is useful in identifying periods when mining stocks are oversold or overbought versus the stock market as a whole. As you can see from the long-term chart, mining stocks have been outperforming the S&P 500 over time with the expected volatility that is mostly confined within the upward-sloping trend channel.

You will notice in the chart below that the XAU/SPX reading has now dropped outside of its long-term trend channel for the first time since the 2008 financial crisis. At the bottom of the chart, you will also notice that the weekly MACD has fallen to its lowest level since the 2008 financial crisis. This signals that the XAU/SPX has reached oversold territory, suggesting that mining equities are very oversold relative to the broader stock market.

The chart also shows the weekly RSI for the XAU/SPX, which fell to oversold territory only twice in the past decade and is now for the third time about to touch the 30 level. This is the lowest level for the momentum indicator since May of 2005, confirming the MACD signal mentioned above. 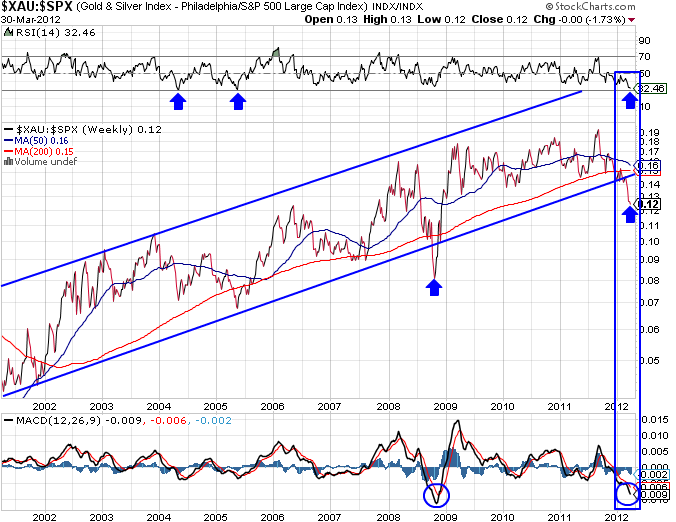 This is the first time in the past decade when there has been a convergence of these three technical signals. Not only has the XAU/SPX fallen outside of its long-term trend channel, but both the RSI and MACD indicators are flashing oversold. Conditions such as this tend not to persist for long, especially against a backdrop of strengthening fundamentals for precious metals. The amount of central bank printing that has occurred to prevent a Euro collapse in the past few months is well over $1 Trillion, in addition to a series of swaps and other stealth moves by the Federal Reserve to inject liquidity into banks that should have failed long ago.

The obvious pair trade here is to go long mining stocks and short the S&P500. The only scenario that I can imagine where this trade would fail is with a major Euro nation default that the central banks aren’t able to quickly paper over and prop up. Such an event could create a larger decline in the XAU than the SPX in the short term. While I believe the financial markets will spiral out of control eventually, my money says this will not occur until after the November elections.

I run a number of charts like this one every month in order to identify profit opportunities in the market. I have increased my long exposure to mining stocks in the past week and will continue to do so next week. If you would like to follow my exact trades and view all of the stocks held in the Gold Stock Bull portfolio, click here to sign up for the premium membership.

In addition to receiving email trade alerts and gaining access to the GSB portfolio, you will also receive the monthly contrarian newsletter and all of our premium member guides, designed to help you prepare for the potential of a dollar collapse. The Gold Stock Bull newsletter has become one of the top-rated subscription newsletters available. At just $39/month or $299/year, I believe you will find it to be an excellent value for the money. Click here to get started.