Some have theorized that Russia would have to stop buying gold and even start selling their reserves due to liquidity issues brought on by Western sanctions. These analysts called it a bearish development for gold, just prior to gold rallying by 10%. Nice timing.

The truth of the matter is that Russia has been undeterred in their rapid accumulation of gold reserves, while dumping their U.S. dollar and U.S. debt holdings. For proof, the Russian Central Bank just released data showing that they purchased 600,000 ounces of gold in December. This is in line with previous months and well above the average monthly purchase over the past few years. 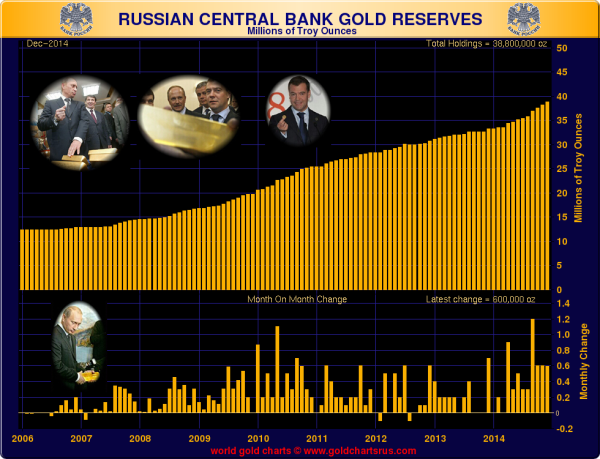 The continuing strong demand for gold coming from Russia and China should be supportive of prices in 2015. As physical metal continues to be withdrawn from the Shanghai Gold Exchange (SGE) and popular ETFs such as GLD and SLV, we believe there will eventually come a breaking point and major disconnect between the paper and physical markets. This will be highlighted by rapidly increasing premiums, whereby physical buyers are unable to get gold or silver anywhere near the official COMEX prices. We aren’t there yet, but the cracks in the foundation of the paper Ponzi scheme do appear to be getting larger.

This is occurring as the world moves away from US dollars in international trade, preferring to settle in local currencies or even precious metals. As de-dollarization accelerates and demand for dollars wanes, there will eventually come a point when the current dollar rally halts and makes a sharp reversal to the downside. It is already very overbought, but could continue higher after the recent ECB $1 Trillion Euro QE announcement.

In the meantime, gold has somewhat de-linked from the usual inverse relationship with the USD and has been moving up alongside the dollar. This is a bullish development that we have been anticipating for some time.

In the short-term, I would not be surprised to see a small pullback driven by profit taking. We will be using any such decline to add to our positions and remain convinced that 2015 is going to be a very strong year for precious metals and a very profitable year for those invested in mining stocks.