Shorts Throw in the Towel, So It Could Finally be Time to Short the Market

U.S. stocks hit record highs today, boosted by expectations for continued easy money from central banks around the globe. The rebound since the huge crash caused by the 2008/09 financial crisis has truly been something to behold. From the low of 667, the S&P 500 has now more than tripled in roughly 7 years. Despite multiple economic indicators suggesting that stocks are overbought and overvalued, they have simply continued to push higher. 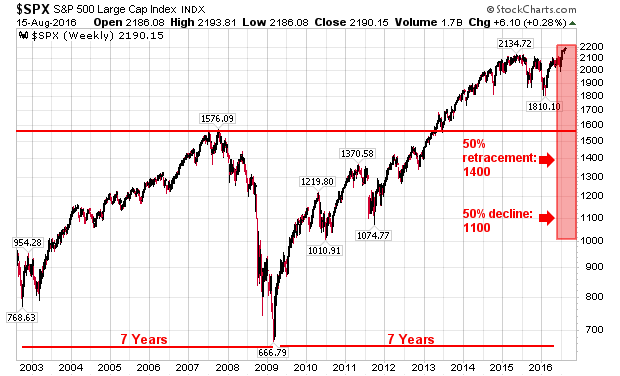 But stocks have a tendency to move in 7-year cycles and this current bull market phase in equities may finally have run its course. A 50% retracement of the gain since the 2009 low would equate to the S&P 500 index sinking to 1,400, a drop of 36%. If the correction is comparable to the last crisis, we can expect a decline of 50% or more.

I believe this type of correction is inevitable, as central banks run out of ammunition and realize a sharply diminishing return on their stimulus efforts.

ZeroHedge ran an article today highlighting the fact that short sellers have thrown in the towel, as S&P short interest tumbled to a 3-year low this week. This means that as of this moment, the S&P500 short interest as a percentage of market cap is at three year lows, as most of the weak hands have been flushed out. 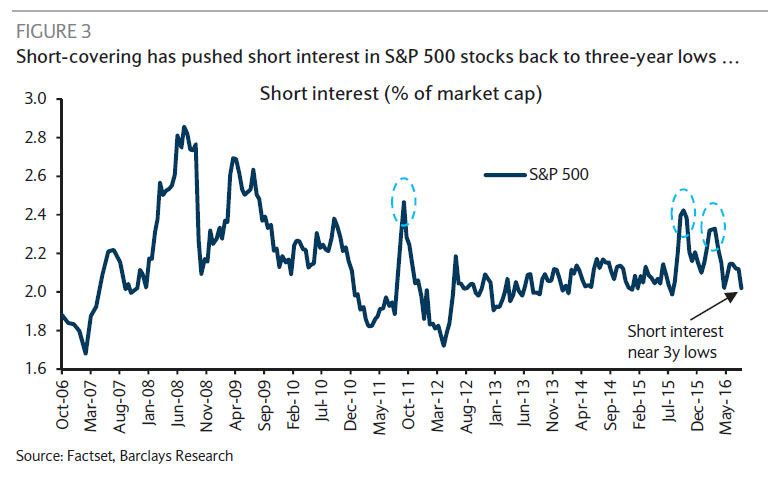 As a contrarian investor, this tells me we are likely approaching a top in the stock market and opportune time to start shorting stocks. Another indicator that suggest we may be near a top is the Fear/Greed index. It recently hit 86, which is indicative of extreme greed. This is the highest level since 2014, up 17 points from last month! If we want to sell when others are greedy and buy when others are fearful, this chart suggests now might be a good time to sell.

I don’t believe we are at the absolute top quite yet, but I think it will be established within the next six months. And when the sell-off finally occurs, look for short sellers to pile on aggressively. This is not going to be a gentle decline in my opinion, as equity valuations have risen far too high to be sustained.

In addition to shorting stocks, we also plan to increase our exposure to precious metals. They stand to benefit from a tsunami of investors seeking safe-haven assets and piling into one what has already been one of the best performing asset classes of 2016.

With the relatively small size of the gold market compared to stocks or bonds, even a modest flow of new money into the sector is likely to overwhelm supply and push prices sharply higher. It is estimated that investor participation in the gold/silver market is currently somewhere around 1%.  If this increases to 3% or 4% of investors, demand for the metals and miners that produce them goes exponential. Paper shorts may be able to absorb some of this new demand, but even with the modest buying pressure of 2016, there have been relatively few major price smackdowns.

Lastly, precious metals are heading into their strongest buying season of the year. Measured over the past several decades, there is a consistent pattern of increasing demand and increasing price points for gold and silver from late August through February. Being positioned ahead of the next major advance should be very profitable for investors.

If you would like to view our portfolio, get all of our stock picks, receive the contrarian newsletter and receive weekly trade alerts, click here to become a Gold Stock Bull Premium Member.