Silver has been the money of commerce for several thousand years.  In contrast, unbacked debt-based fiat currencies have been a devaluing money substitute for decades.

According to the St. Louis Federal Reserve, total debt securities and official national debt have increased exponentially for decades.  Prices for the stock market, silver, gold, food and most other necessities increase similarly. 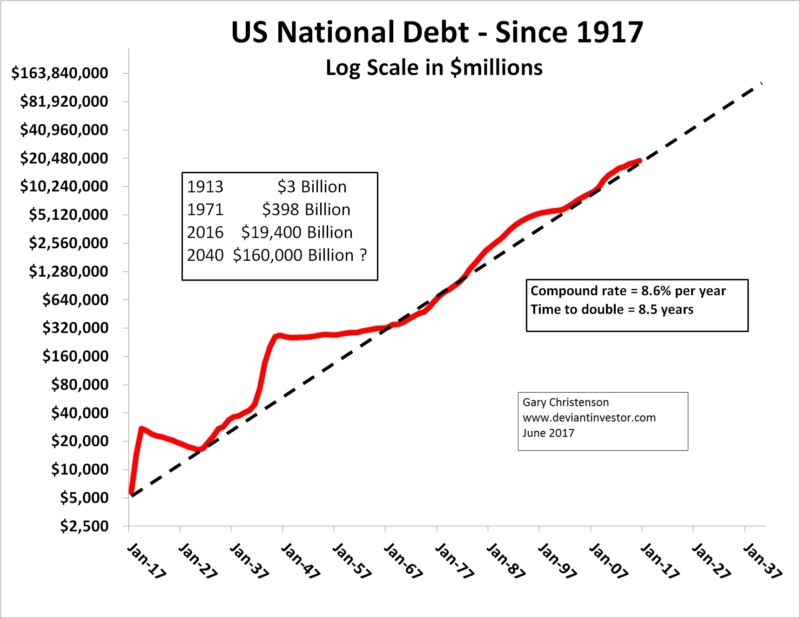 National debt has risen at 8 – 9% per year since 1913.  Since then the value of the dollar has rapidly devalued.  Gold and silver rose in a generational bull market bubble into 1980 and then collapsed for two decades. Since 9-11 they have risen along with spending on endless wars and massive government deficits.

Note that both gold and silver have corrected to the bottom of the long-term trend channels and are overdue for a major bounce if support holds. 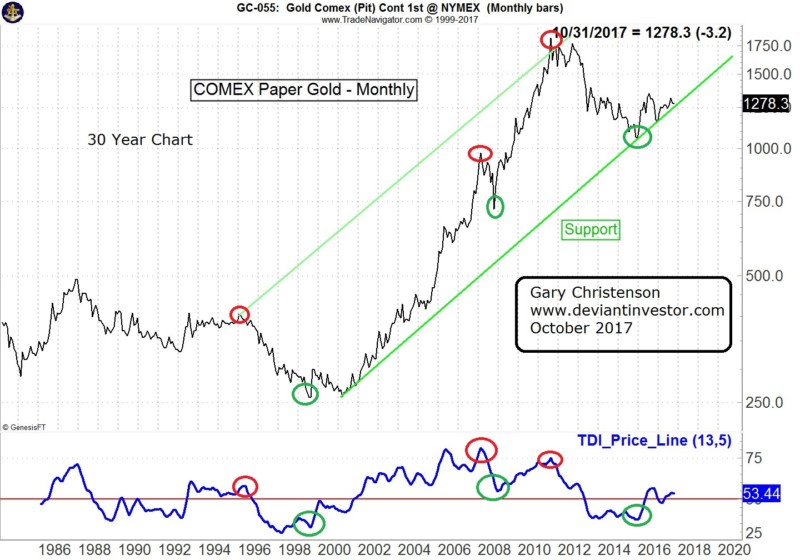 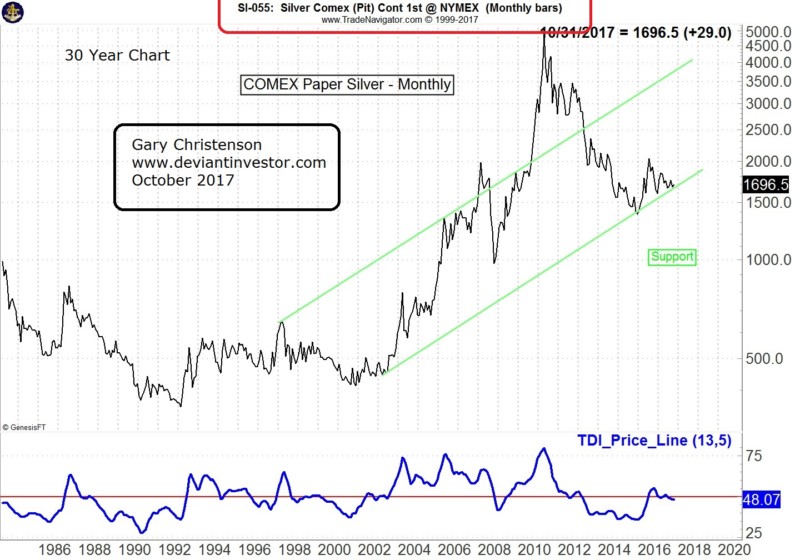 Because central banks subsidize inexpensive debt and support stock markets, it is no surprise that global debt exceeds $200 trillion and several stock markets trade at all-time highs.  Many people believe the current stock market rally has bubbled to new highs on the back of the huge bubble in global debt.

Examine the 30 year chart of the monthly Dow Jones Industrial Average (DOW). It looks like a bubble on a linear scale.

The same chart on a log scale shows an exponential increase as a straight lines. The Dow crashed in 1987, corrected in 1998, crashed in 2000 and 2008, and has hit numerous all-time highs in 2017. The RSI, a timing oscillator at the bottom of the graph, indicates an “over-bought” condition on the monthly chart. The weekly and daily RSI are not shown but also indicate over-bought levels.  Late October 2017 is a time for caution. However the Dow can become even more over-bought.  There are few limits on crazy. Regardless, stormy weather lies ahead. 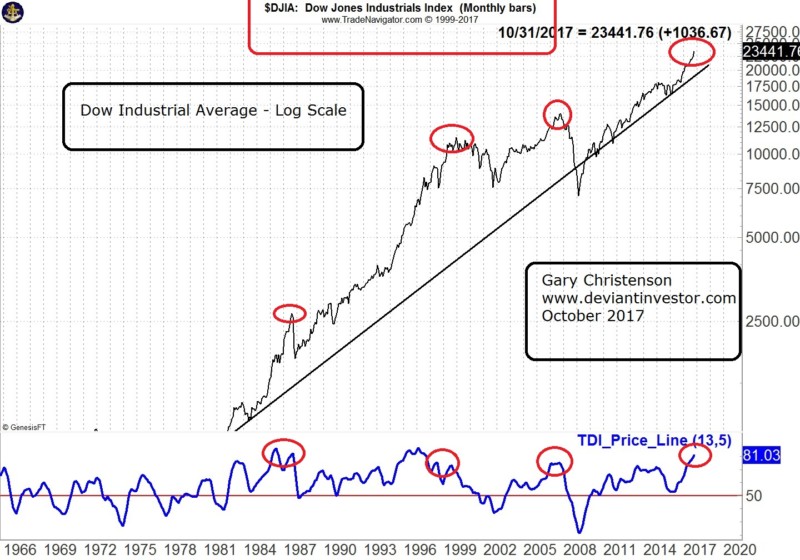 TANSTAAFL is an acronym for “There ain’t no such thing as a free lunch.”  The saying has been used for years, even prior to Robert Heinlein’s “The Moon Is A Harsh Mistress.”

The acronym means someone must pay a price for everything – there is no free lunch.

What price will individuals, pension plans, governments and global economies pay for the creation of unsustainable debt and stock bubbles?

There is no free lunch, governments and central banks have made many bad decisions, and consequences from subsidizing bonds and stock markets will “come home to roost.”  These consequences may be life-changing and drastic.  Consider thoughtful preparation.

You can buy 30 year bonds (a very LONG commitment) and earn a bit less than 3% per year in a currency virtually guaranteed to decline in value. You can place your savings into a Certificate of Deposit and earn 1% (less than the loss from inflation) per year.  You could be “Cyprused” with a “bail-in” that converts your deposit, which is legally a liability of the bank and not your money, into equity in a failing bank.  The laws are in place and the precedents have been set.

Alternatively, you can purchase “insurance” in the form of gold and silver and enjoy their inevitable price increases driven by government spending and accelerating debts.

Unless you believe that Congress will balance the budget and substantially reduce the national debt, I strongly encourage investment in gold and silver. 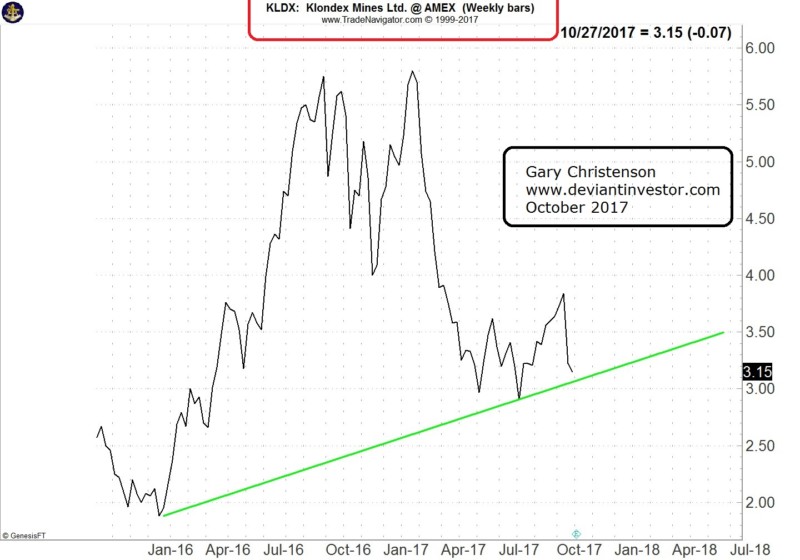 The company announced “that exploration drilling on the Parral property in Chihuahua State, Mexico has verified high grade silver mineralization within the Argentina-Remedios area of the Veta Colorado, which was drilled but never mined by a previous owner, IMMSA.” 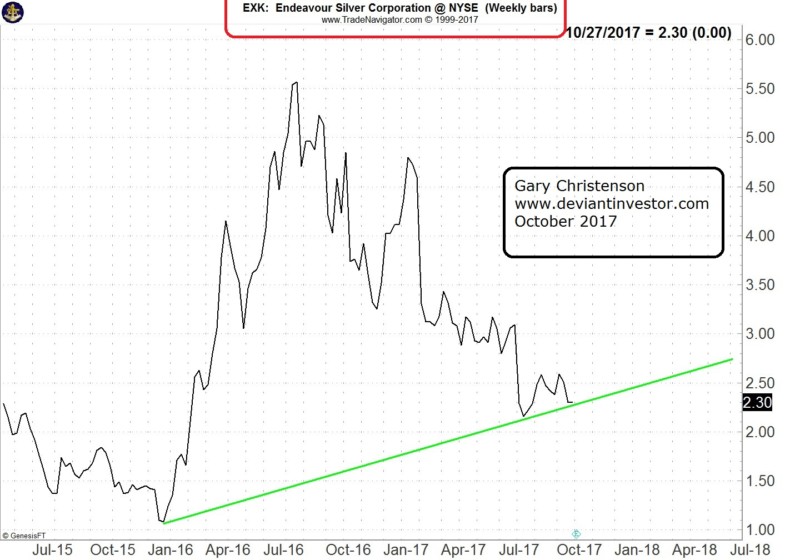 The following graph shows that the ETF peaked in 2011 along with the price of silver, fell hard into January 2016 and has more than doubled since then. 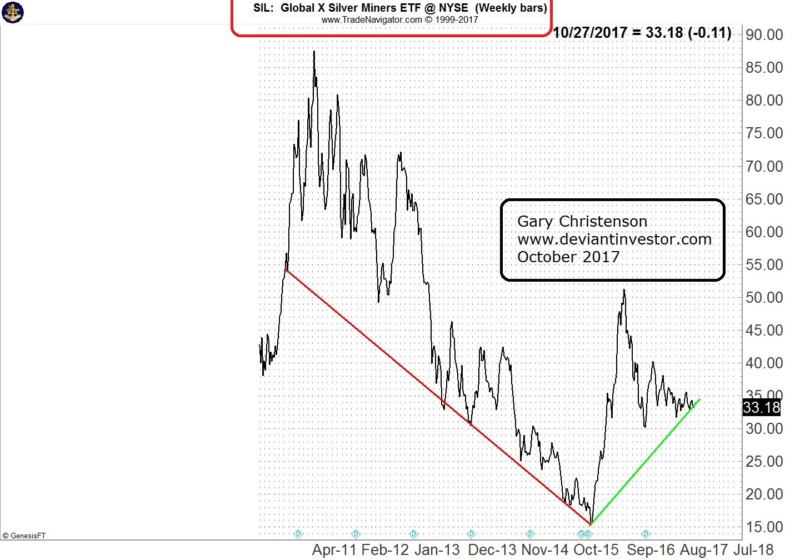 Do your own due diligence on all stocks and metal purchases. Beware of all-time highs in stock indexes based on ever-expanding credit.

Bonds and stocks have been levitated by central bank “money printing” and devaluation policies. There will be a reaction, probably severe and possibly soon.

Silver and gold have been money and a store of value for many centuries.  They will remain so in spite of government and central bank disinformation. Debt based fiat currencies will continually devalue as they have for many decades.

TANSTAAFL:  There is no free lunch, there are consequences to actions, and debts will be paid with devalued currencies or the debt will default.  Gold and silver will not default.