There are some bizarre things going on in the silver market at the moment, reminiscent of the supply shortages and high premiums witnessed in 2008. For starters, silver is currently in both short-term and long-term backwardation, suggesting there is higher demand for silver NOW than in the future. This is backed up by the U.S. mint reporting all-time record sales for silver eagles during the month of January, with three days still left to go. Sales are on pace to breach 5 million coins sold, shattering the November 2010 record of 4.6 million. It is worth noting that all of the 2010 American eagle gold proof coins also sold out, but the focus of this article will be on the increasing signs of a shortage in silver.

Just yesterday, King World News interviewed one of the top gold and silver dealers in the United States about tightness in the silver market. Bill Haynes is President and owner of CMI Gold & Silver and when asked about a shortage in silver he stated:

“All of the major suppliers of 100 ounce silver bars are either weeks or months out, some will not even take orders. I had some conversations with a number of people who buy from them, had to dig through the information and some of them revealed that they thought the refineries were having trouble and the manufacturers were having trouble getting the physical product which falls right into the silver shortage.

Zerohedge also reported that the UK was the latest region affected by growing silver shortages after a British bullion dealer notified clients that the company had no remaining silver bars in stock and BullionVault posted a page on their site saying they were not accepting orders for silver in London.

In addition, Eric Sprott had to wait over two months to finally take delivery of the 22 million ounces needed for his new silver fund. He was recently quoted as saying:

“Frankly, we are concerned about the illiquidity in the physical silver market,” said Eric Sprott, Chief Investment Officer of Sprott Asset Management. “We believe the delays involved in the delivery of physical silver to the Trust highlight the disconnect that exists between the paper and physical markets for silver.”

Another example of the growing disconnect between the paper spot price and free market pricing is the fact that silver coins such as Silver Eagles or Canadian Maple Leafs are selling for $4 – $6 over spot on Ebay. This is a fairly liquid worldwide market for exchange and the premiums have been increasing in the past few months to as high as 20%!

Even one of the largest online dealers of silver bullion is now offering to BUY BACK silver coins such as American Eagles for $1.75 or more over spot price. That is right, while the official spot price was $26.75 this morning, APMEX was offering to buy Silver Eagle coins for $28.50. 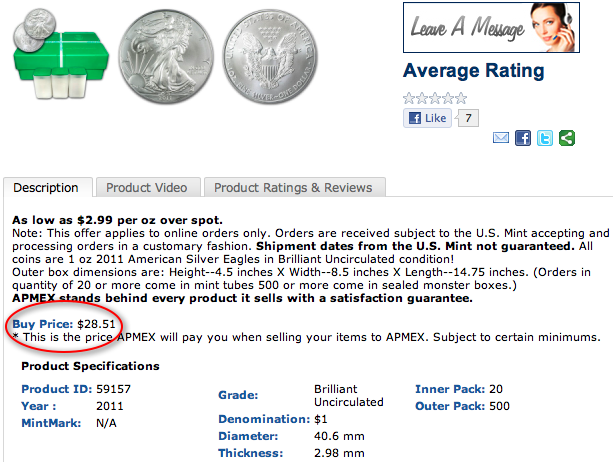 Reasonable estimates suggest that if only 15% of those long silver futures decide to take delivery of physical silver, the COMEX will not have enough silver to deliver and a serious short squeeze will result in the silver price shooting dramatically higher. There has been a growing movement led my Max Keiser, Jim Sinclair and various newsletter writers encouraging investors to shun paper forms of ownership, buy only physical and stand for delivery on paper contracts. If this catches on, reaching the 15% threshold could happen rather quickly.

What is extraordinary about this apparent supply shortage is that it is occurring in the face of a declining spot price for silver. Economics 101 would teach that record demand and widespread shortages would create a spike in prices, but this is not occurring in the silver market and further highlights the growing disconnect between the phony paper market and true physical market.

To be fair, many are claiming that the buzz about a silver shortage is overblown, that Bullionvault is now selling silver again and that dealers may be exaggerating the case in order to create fear and drive sales. One dealer that I spoke to yesterday, Hannes at Tulving, told me that he has not seen any shortage in silver and has over 400,000 ounces in various forms, ready to be shipped. Perhaps the shortage story is getting overly dramatized or perhaps it has not hit all dealers yet. Time will sort this out, but either way, there are various fundamental conditions that are out of equilibrium and suggesting some underlying cause for concern.

Fundamentals Out of Balance

The fundamentals remain severely out of whack. Consider that since 1980 the above ground available gold is estimated to have increased by 600%, yet the price has still nearly doubled. During the same time period, the above ground available silver has declined by an estimated 90%, yet silver is still nearly 50% below its high from 1980. Even if we assumed that above ground supplies were stable for both metals, silver would have some serious catching up to do. But considering that the above ground silver supply has DECREASED significantly while the above ground gold supply has INCREASED significantly since 1980, supply and demand fundamentals would dictate that silver would be the metal making new highs and the gold/silver ratio would be reverting back toward the 15:1 ratio. With gold currently around $1,350, we should be seeing silver around $90 or higher.

The other thing to remember is that the fundamental divergence is only getting worse as gold is hoarded, while a significant percentage of the silver mined is used up in industrial applications such as batteries, converters, cell phones, computers, satellites, circuit boards, high tech weaponry, clean tech, water purification, etc. Demand continues to outpace supply each year and with stimulus-fueled economic growth continuing, the fundamentals are sure to drive silver prices much higher, despite the paper shorting schemes of the banksters.

So, to what extent there is a shortage in the silver market remains to be seen, but I would venture to guess that with a 80% gain in 2010, investor interest must be increasing in a relatively tight market. It will only take a small percentage of the money invested in stocks to switch over to physical silver to create the shortages that many are claiming. Either by a growing number of small investors waking up to silver’s potential or just a few ultra-wealthy individuals deciding to take a stake, the potential for a massive short squeeze is very real.

Adding to the fundamental conditions driving precious metals higher, the Congressional Budget Office is now forecasting that, with the current spending trajectory and the new tax compromise, total debt will reach $23 trillion by 2020. That is equal to 160% of today’s GDP and 1.6 times the peak from World War II. This number does not count unfunded liabilities such as Social Security and Medicare, or the debt the government assumed from Freddie Mac and Fannie Mae, which puts the total debt over $100 Trillion by many estimates. With S&P downgrading Japan’s debt and others warning that the U.S. could be next, there is certainly trouble brewing in the financial system. Some believe the United States is already past the point of no return and that it will be impossible to ever repay the mounting debt. It is all destined to end badly, either in default or hyperinflation.

Even after the 80% gain in 2010, silver remains one of the best investment opportunities available today. Supply shortage or not, investors would be wise to ignore the mainstream media claiming a top and instead use this dip as a buying opportunity. I expect silver to reach towards $45 during 2011 and surpass $100 within the next few years. The train is truly about to leave the station. Are you on board?

Realizing the disconnect between the gold and silver prices, I have been focusing my newsletter on junior silver miners that appear undervalued relative to their peers. If you would like to receive my newsletter, view the model portfolio and get email alerts when I am buying or selling, click here to sign up.