In the following video, Mike Maloney breaks down the evidence of silver manipulation over the years. It includes smoking gun evidence in the form of texts and emails between traders at the major banks.

Deutsche Bank recently settled a lawsuit accusing it of the rigging silver markets. And as part of the settlement, the bank released 350,000 pages of documents and 75 audio tapes. These documents show there was a silver market “mafia” of big banks including Deutsche, UBS, and HSBC all working together to artificially suppress the price of silver and fleece the general public in the process. Former members of the manipulation cartel have turned on each other.

Traders and submitters at the big banks were captured coordinating trades in advance of a daily phone call, manipulating the spot market for silver, conspiring to fix the spread on silver offered to customers and using illegal strategies to rig prices. Of course, the regulators were asleep at the wheel during all of this, despite being emails the evidence over and over by GATA and other groups.

The takeaway for investors is clear. Accumulate on the smash downs with a long term view and do not try to trade against those manipulating the prices. We are repeatedly given an opportunity to buy at artificially suppressed prices and need only have the courage to go against the herd and buy when everyone else is panic selling. You can follow our trades and get all of our stocks picks for less than $1/day here.

Some examples of the chats quoted are shown below. In the first example a chart between DB and HSBC traders in which one HSBC trader says “really wanna sel sil

[ver” to which the other trader says “Let’s go and smash it together.”

Another chat transcript from May 11, 2011 reveals a Deutsche Bank trader telling a UBS trader that the cartel “WERE THE SILVER MARKET”(sic) based on feedback from outside traders to which UBS replies, referring to the silver market “we smashed it good”, leading to the following lament “fking hell UBS now u make me regret not joining.”

Finally, for all those traders who wonder what happened to their stops as a result of dramatic moves in the price, here is the answer: a June 2011 chat between a UBS and a DB trader comes down to the following: “if you have stops… who ya gonna call… STOP BUSTERS” 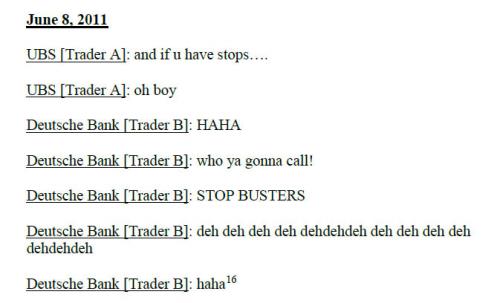 Will all the tinfoil hatters please stand up? You have been vindicated.

Of course, the executives that allowed this to happen under their watch will not be punished. The banks are only being asked to pay back a portion of the profits they illegally obtained. If you are a trader that was targeted and repeatedly stopped out of your positions, good luck getting compensated in any lawsuit. If you are a long-term investor that used these temporary price drops to accumulate, congratulations.

I believe we are currently gifted with another excellent buying opportunity in the precious metals market. The “Trump Rally” is long in tooth and the rake hike is almost behind us, If history is any gauge, we should see the resumption of the bull cycle in gold and silver following the rate hike.