The market has enjoyed an impressive rally, as the S&P 500 gained nearly 38% in under three months. But the rally is showing signs of strain as investors look to book profits ahead of the seasonally-slow Summer months. The average return for the Dow from the start of May to the end of October over the last 20 years has been 0.44%, while the average return from the start of November to the end of April has been 6.86%.

But we are not in normal economic times, so anything goes this season as investors are hungry to regain large losses incurred over the past year. Even with the 38% gain, the S&P 500 is still 40% lower than the start of 2008. That’s the rub – a 40% recovery doesn’t make up for a 40% loss. So I think we will see an unusually active Summer season in the markets.

The V-shaped recovery is truly beautiful to behold, but has run into significant resistance. Rallies have failed on three previous attempts to break out from this range. In addition, technical indicators are flashing overbought and have approached levels not seen since May of 2008, just prior to the 50% crash. 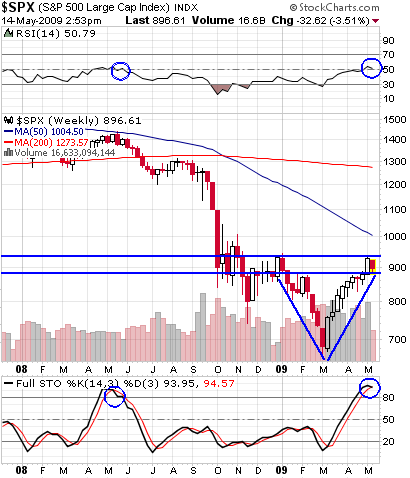 I don’t believe the market will muster enough energy to breach this resistance and think we could see a sharp sell off into the end of May. If I am correct, this presents an huge profit opportunity by purchasing the ProShares Ultra Short S&P 500 (SDS). 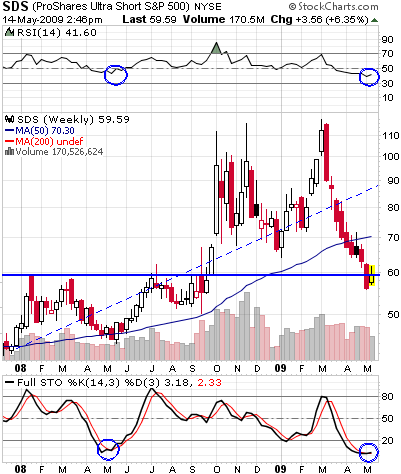 SDS has support just under the $60 level, which provided resistance on four separate occasions during 2008. Technical indicators are flashing oversold and have just begun to turn up. I like SDS at these levels and while only time will tell if we are too early with this trade, I established a position this week and added the fund to the Gold Stock Bull Portfolio.

The big question on the minds of investors is whether or not the markets have put in a bottom. Many assume that a rally of this magnitude is evidence enough that the worst is behind us. Others, such as Peter Schiff, claim that the collapse has barely begun. And if you study the history of recessionary periods in America, rallies of this magnitude are par for the course. They are referred to as “suckers” rallies, as investors get sucked back into the markets before the correction has truly run its course.

However, if you throw enough money at a problem the stimulus can endure. But many see this tactic as delaying the inevitable and amplifying the magnitude of its eventual resolution. I agree with this perspective and see the current rally as a smoke and mirrors illusion, designed to inspire confidence in the markets and prevent public panic. Until job creation and manufacturing turn the corner, it is difficult to believe we are out of the woods. Unemployment figures continue to worsen and the only job creation is coming from the government. This isn’t a good sign and doesn’t suggest that the current rally will be sustained.

The trillions of dollars borrowed, printed and injected into the economy certainly seem to be having the desired effect. The question is whether this will produce a short term blip or lead to sustained economic activity. Stock prices may hold up in nominal terms, but the 800-pound gorilla in the room is certainly inflation. I can’t imagine how it would be possible to escape inflation after the unprecedented amounts of money the government has printed and borrowed to stimulate the economy. Nor do I see how the Fed could mop up the liquidity even if they had a sincere desire to do so. It has never been attempted on this scale and the result would almost certainly lead to a free fall in the markets.

So, my expectation is stagflation with the possibility of hyper-stagflation. This painful combination of recession and high inflation means that most Americans won’t be able to increase their incomes fast enough to keep up with the inflation. And many will lose their jobs as unemployment rates continue higher.

It isn’t a rosy scenario, but serves to underscore the importance of hedging against inflation. Commodities in general and gold in particular should do very well in this environment and help to protect investor wealth from the hidden tax of inflation. Indeed, gold has already been the best performing asset class over the past 8 years, with the metal more than tripling in value. Critics argue that gold does not pay interest or dividends, but I’ll take a 300% gain and no dividends over the performance of any dividend-paying stock or interest-bearing account in the past decade.