It has been a wild ride for cannabis stocks in 2018. The largest cannabis producer, Canopy Growth Corp (CGC), had their share price rocket from $24 to $57 in the two months leading up to full legalization in Canada. This represents a gain of 137% in under two months. The share price has since corrected to around $33 and looks to be offering an attractive entry point once again.

Shares of Tilray (TLRY), the first cannabis company to IPO in the United States, had an even more impressive ascent. Their share price rocketed from $22 to around $300 briefly, before collapsing back to the $100 level. A low float and the distinction of being first to trade on a major exchange in the U.S. helped push the share price to such nosebleed levels.

But as is usually the case, investors bought the rumor and sold the news (regarding full-scale legalization in Canada). Valuations of Canadian cannabis companies cratered following legalization. Provincial governments also created bottlenecks and inefficiencies that led to many retails outlets running out of supply.

Even today, cannabis outlets in Canada have only been able to secure a fraction of the product they have ordered. There is plenty of finger-pointing happening, but government distribution and regulation is a key factor in the slower-than-expected rollout. This has led to disappointing Q3 financials for many of the large cannabis growers.

While there is currently a lack of sufficient supply to meet demand, it is believed that the large amount of investment in production facilities over the past year will soon lead to oversupply in the markets. This oversupply will likely lead to lower prices and margin compression for cannabis growers starting at some point in the back half of 2019. So while the producers should do well for another 6 to 12 months, they will eventually face headwinds and declining profit margins from their grow operations.

This is why we have been focused on investing in cannabis companies that derive a significant portion of their revenue from activities other than growing the plant. This includes things such as distribution, brand building, value-added production like oils and edibles, cannabis-infused drinks, legal/regulatory consulting and retail operations. The margins in these activities should be shielded from any oversupply issues that come up in the years ahead.

At Gold Stock Bull, we first started buying cannabis stocks in the summer of 2017. Even with the recent correction, we have still realized the following gains:

While these large cap producers should continue to do well, we believe the biggest gains will be realized from investing in some of the up-and-coming names that still fly under the radar of most investors.

Some of these smaller companies have grow operations, but a larger percentage of their business is focused on building brands, opening retail outlets, owning distribution networks and manufacturing value-added cannabis products like vape oils, cannabis oil tinctures, edibles, sleep aids and beverages. Others specialize in growing highly medicinal strains that can help with a variety of ailments.

We also believe that the geographic opportunity will be shifting from Canada to the United States over the next few years. The early opportunities were in Canadian cannabis companies, but the emerging opportunities are coming from companies that are rapidly expanding U.S. operations.

California alone is expected to generate more cannabis sales than all of Canada this year. Furthermore, public sentiment has shifted dramatically in the United States where recreational weed is legal in 10 states and medical marijuana is legal in 33 states. This includes the addition of full legalization in Michigan after the November elections, marking the first mid-West state to do it. Even the staunchly conservative state of Utah voted to legalize medical marijuana use in the mid-term election.

We’re inching closer and closer to federal action, especially now that the anti-cannabis Attorney General Jeff Sessions has been replaced. It is also an overall positive for the cannabis industry that the Democrats took control of the House. When the Federal government finally aligns policy with the will of the people and removes the ridiculous Schedule 1 classification of cannabis (making it equal to heroine or crack cocaine), the industry will see a significant acceleration in the already massive growth it is experiencing.

The Trump administration promised as much on the campaign trail. And while this doesn’t make such action certain, it does increase the odds that cannabis could be legalized on the Federal level during his Presidency.

Note that there is bi-partisan support for de-scheduling cannabis. A recent Gallup poll found that marijuana legalization is a bipartisan issue: 64% of Americans, including 51% of Republicans, say they support it.The House version of the Marijuana Justice Act, introduced by Reps. Barbara Lee and Ro Khanna of California and sponsored by 12 House Democrats, is a companion to Sen. Cory Booker’s Marijuana Justice Act, introduced in the Senate last year.

So, how can investors capitalize on this trend towards legalization?

Buying the big-name producers is a smart move in our view, particularly now that they have corrected by 30% to 50%. They will do well in our view. But not nearly as well as the junior cannabis companies that are focusing on more than just growing the plant.

While we hold a handful of small cap cannabis stocks, there is one stock in particular is vastly undervalued relative to its peers. Very few cannabis investors know this name and you won’t hear CNBC talking about it like they do with the bigger players.

This company is our #1 cannabis stock pick for 2019. It has a horrible name that is hard to remember and engages in very little marketing or investor relations. But this is precisely why it remains undervalued and it is a screaming buy at current levels.

Put simply… I believe this stock has the potential to give investors a 3X return over the next 12 months!

The management team is composed of not only cannabis industry veterans, but those with experience in the capital markets, operations, real estate development, healthcare, legal services, regulated business and government affairs.  They bring a disciplined approach to every aspect of the business, with a robust due diligence process to ensure the greatest efficiencies and highest return for shareholders.

In addition, the company has a distinguished doctor on their board that has served on the National Cancer Advisory Board at the National Institute of Health. He is dedicated to the advancement of research and improvement in medical standards in the provision of medical cannabis to cancer and other patients.

I always like to invest in companies that have high insider ownership. I want management that has skin in the game and has their interests closely aligned with shareholders. In the case of this under-the-radar cannabis stock, insiders own over 14% of the outstanding shares.

This is a vertically-integrated cannabis company with operations in 10 states. They have a footprint in both the West and East coasts. Their margins are massive, as they not only grow the plant at their dozen or so facilities, but process the oils and own over 50 retail outlets where their products (and other brands) are sold. Their retail businesses receive excellent reviews across a number of review sites, which is important as the space becomes more competitive.

They have operational scale in high growth markets and will be more than doubling their cultivation and processing facilities to over 500,000 square feet in the near term.

How large is the opportunity?

The cannabis market is estimated to grow by 50% to $50 billion in the United States this year. Cannabis sales now rival American spending on Netflix subscriptions – and will likely surpass McDonald’s annual U.S. revenue this year! I believe investing early in cannabis stocks will end up being one of the most lucrative investments you can make.

Our #1 cannabis stock pick has first-mover advantage in most of the key U.S. markets, with an addressable population of over 100 million people. They are well-funded for growth and have already secured licenses in key states. These licenses are strictly limited, difficult to obtain and will prove increasingly valuable over time.

In fact, this small cap cannabis company will be opening the first cannabis dispensary in a key borough of New York next month and the second retail cannabis outlet in another key East coast city during Q1 of 2019. Annual sales at these locations are estimated to be in the range of $5 million to $20 million per store!

Near-term store openings are expected to add over $5 million per month to the company’s revenues. In one key state dubbed the “Colorado of the East,” they are expecting total cannabis sales to reach $1 billion in the years ahead with compound annual growth of 62%!

During Q3, consolidated revenues for the company more than doubled. System-wide revenues eclipsed $5 million, up double digits. They are spending on growth, so reported a loss for the quarter. But the company is well capitalized and strategically growing in key populous cities. They have $25 million in cash on hand and a proven track record of accessing capital market on good terms and issuing shares to make accretive acquisitions.

The share price has corrected significantly in the past few months and is now resting at a key support level. It bounced today and I believe it will move to new highs during the first half of 2019. Over the next 12 months, I would not be surprised to see the share price triple from current levels. 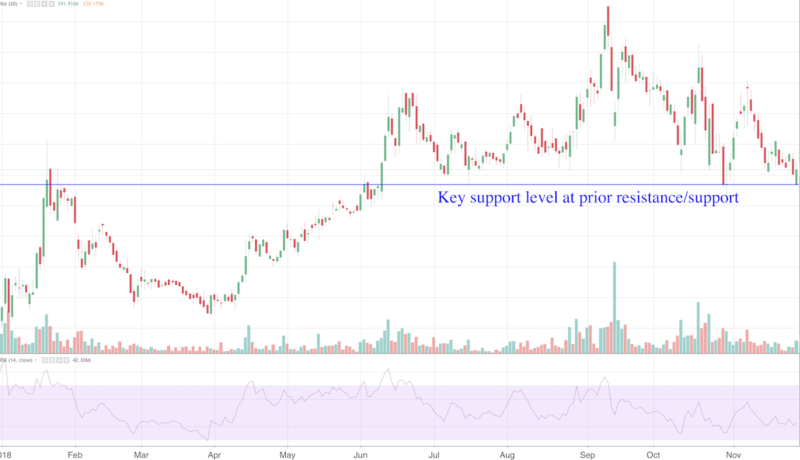 To view our #1 cannabis stock pick for 2019, gain real-time access to our model portfolio, receive the monthly newsletter and weekly trade alerts, sign up for the 3-month trial subscription for just $195. If you are a new subscriber, you can use the coupon code GREENRUSH for 20% off regular prices!

Also, be sure to add your email to our free list below if you have not done so already. You will be first in line to receive our public articles, research and investment ideas. We only send emails occasionally and promise to never share or sell your email address. We hate spam too.