US Monetary Base Hits New Record of $2.8 Trillion

The seasonally-adjusted St. Louis Fed Adjusted Monetary Base just jumped to a historic high level in the two-week period ended February 22nd and now stands at $2.8 Trillion. The movement here largely is under direct control of the Fed’s Federal Open Mark Committee (FOMC) and is suggestive of a deepening systemic solvency crisis, according to John Williams of Shadowstats.com

Fractional reserve banking has the potential (depending on reserve requirements) to multiply every new dollar of base money 10-times, meaning that the $2 trillion of new base money created since the 2008 crisis morphs into $20 trillion’s worth of new credit money sloshing around the banking system. 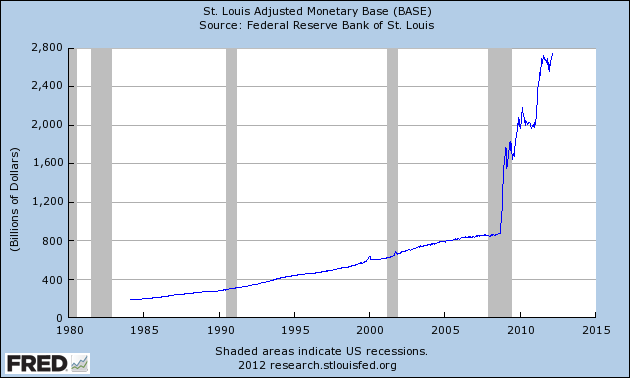 The broader money supply, as measured by the SGS-Ongoing M3 Estimate, reported annual M3 growth rose to 3.9% in January 2012. This is the strongest annual growth seen in 30 months! Watch for deflationary forces to give way to inflationary ones in the next 12 to 18 months. This will help to propel gold and silver well above their inflation-adjusted highs of $2,500 and $150, respectively. If this projection is true, the greatest buying opportunity is precious metals was not in the past few years, but right at this very moment.