Update: Vitasti changed their name to Welwind Energy on October 31st. This name change reflects the company’s focus and commitment to the alternative energy markets. The company’s ticker symbol has been changed to (WWEI.OB). The names Vitasti and Welwind are interchangeable within the article below.

Vitasti (VITS.OB) was formerly focused on selling and distributing health & wellness foods and supplements. Vitasti has a portfolio of low carbohydrate and sugar-free foods which are sold through retail and wholesale outlets in the United States and Canada. They successfully launched a line of Amazon Acai Berry Granolas for sale in various retail chains including Whole Foods Markets. During 2005 and 2006 they developed several private labeled products sold under the brand name “Carb Craver.” Acai is a recent phenomenon in the United States, with importers reporting sales increases of around 500% versus last year. It is often used in smoothies and the fruit is reported to be one of the healthiest in the world. In marketing terms, açaí has been called “the power berry” or “super berry” and even “the Amazon’s Viagra” because of the numerous nutrients ascribed to it. Acai is rich in antioxidants and research has shown the fruit to have anti-cancer effects. It is also reported to have anti-aging effects, give you energy, fight heart disease and improve sexual function. Many call it a fountain of youth. We are no longer in marketing terms, this is based on scientific research. It is easy to see why sales of acai have been shooting through the roof.

But acai aside, Vitasti recently made an acquisition that blindsided many observers. They made an interesting leap into alternative energy by purchasing Welwind Energy International in April of this year. Welwind, was founded to build, own and operate wind farms, with an objective to promote sustainable energy in their feature project in China, where development will be centered along the South China Sea. Vitasti hasn’t wasted any time quickly signing lease agreements and securing the funding necessary to proceed with building the wind project in Zhanjiang. With the $600k private placement, Vitasti will break even on this project shortly after year 3 and will proceed to generate cash flows of over $7 million per year over the first 5 years alone. Cumulative cash-flow expectation by year 10 are projected to be over $60 million. Granted, additional funding/dilution will be necessary for the remaining 4 phases, but these are impressive numbers for a company with a market cap of just $5.5 million (70 million shares outstanding).

Vitasti’s targeting of China has much to do with the positive sentiment towards green energy in China. The government has set a target of twenty percent of its power to come from renewable sources by 2020. That kind of aggressive strategy sets the stage for renewable energy companies to participate in the anticipated growth in wind, solar and energy efficient technologies. In dollar terms, China is set to spend $200 billion on renewable energy over the next 15 years. “Another reason China is looking to wind (energy), is because it is now as cheap as coal”, said Kyle Datta, managing director at Colorado’s Rocky Mountain Institute, a leading independent energy research center. Datta further stated, “And if the health costs associated with coal burning are considered, wind is actually a lot cheaper”.

Vitasti Director, Mr. deDelley, commented that “The stage is set to provide environmentally friendly power to fulfill the needs of a electrically thirsty nation and stave the pollution associated with the massive developments China is experiencing. Our Company, Vitasti/Welwind , has been moving projects ahead to develop 1000 megawatts of wind powered generation along the coast of the south China sea. All levels of government and industry are accepting the wind technology with great enthusiasm and willingness, making our work easier. ”

Mr. deDelley went on to state, “With the political and industry relationships Welwind has forged within China we are looking at continued support to advance the projects and to ensure successful wind farms, creation of rural employment, mitigation of pollution, and provide a greatly needed commodity : wind powered electricity.”

Shannon deDelley is also the president of the Canadian wind energy development company Windcor Power Systems. There isn’t too much information available on Mr. deDelley and it appears that he is the only person in the company with experience in the wind energy market. Vitasti’s president and chairwoman, Tammy-Lynn McNabb, came from a background in sales and marketing for a publication company. The other two listed directors appear to have no experience in alternative energy companies. If there is one area of the company that we are uncomfortable with, it is the managment team and apparent lack of experience in the wind energy sector.

Still, we believe that wind energy (along with solar) is the future. Unlike coal and oil, these sources of energy are renewable and sustainable. Largely motivated by the increased price of crude oil, green energy technologies have been receiving an injection of new attention and funding, which has enabled great strides in the efficiency of the energy conversion. In fact, wind turbines generated 59,000 megawatts of power around the world last year, more than quadruple the amount in 1999. The World Wind Energy Association estimates that figure will more than double again by 2010. 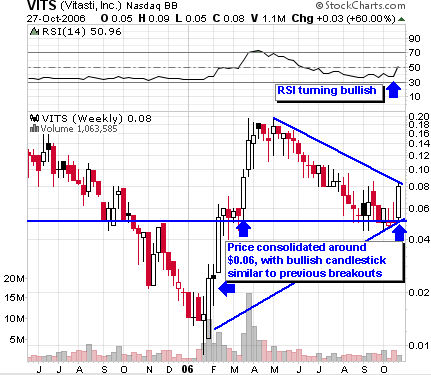 The latest candlestick analysis displayed a buy signal for Vitasti. Another bullish sign is the sudden increase in trading volume. In fact, Vitasti was up 23% on volume that was 61% higher than average on its last trading day (10/27). The market is starting to take notice, but at only $0.08, this stock is still very cheap. Vitasti’s share price jumped from around $0.05 to $0.17 following news of their acquisition of Welwind. Along with most alternative energy stocks, the share price has since retreated in light of cheaper oil prices. We believe the stock price will see $0.17 again, likely in the next 6-8 months. But the share price is volatile, so we are hoping to pick up shares on dips below $0.06. This could be a homerun stock pick, but we view it as a high risk/high return investment which should only represent a small part of any portfolio.

There aren’t many options for those wanting to invest in wind energy. In addition to Welwind, you may also want to consider Vestas (VWSYF.PK) as a pure wind energy investment. With more than 30,000 wind turbines generating electricity around the globe, Vestas is the world’s largest supplier of wind power systems.

Of course, you should do your own due diligence, especially with bulletin board stocks that carry a high risk profile and trade thinly. We do not currently own stock in Vitasti (or Vestas) and have not been compensated in any way to publish this article. As stated above, we are looking to take a position on any dips in the coming weeks and believe in wind energy as a viable long term investment.