Why I’m Not Buying into the Bitcoin Cash Hype 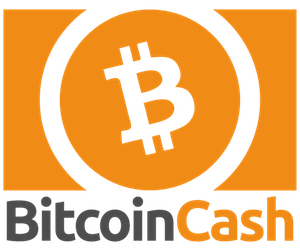 Bitcoin Cash (BCH) was a fork of Bitcoin blockchain ledger that launched on August 1st and increased the block size to 8MB. The stated goal of this fork is to lower fees and speed up transaction times. At the time of the fork, those holding Bitcoin received an equal number of Bitcoin Cash coins.

Bitcoin Cash is in the headlines after the price spiked roughly 6x in a matter of just 4 days. FOMO (fear of missing out) started to kick in and people bid up the price from $400 at the start of November to a high of $2,450 on November 12th. Bitcoin Cash overtook Ethereum in terms of market capitalization and many people started to believe it would overtake Bitcoin at the #1 spot. It has since dropped by to #3, but not far from the valuation of Ethereum or 8x the valuation of Litecoin. 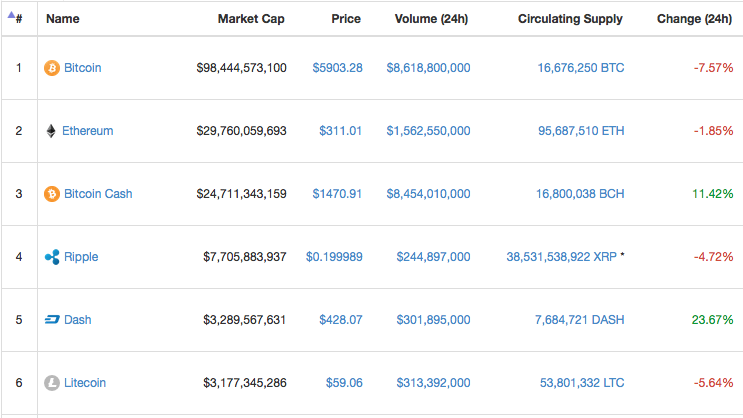 The price of Bitcoin Cash (BCH) has dropped sharply from the high around $2,450 to $1,200, before rebounding to $1,450 over the past few hours. Lower highs and lower lows on the chart is usually bearish for any pricing pattern. A breakout back above $1,500 in the near term would change this and another drop below $1,250 would likely lead to the price crashing back below $1,000. 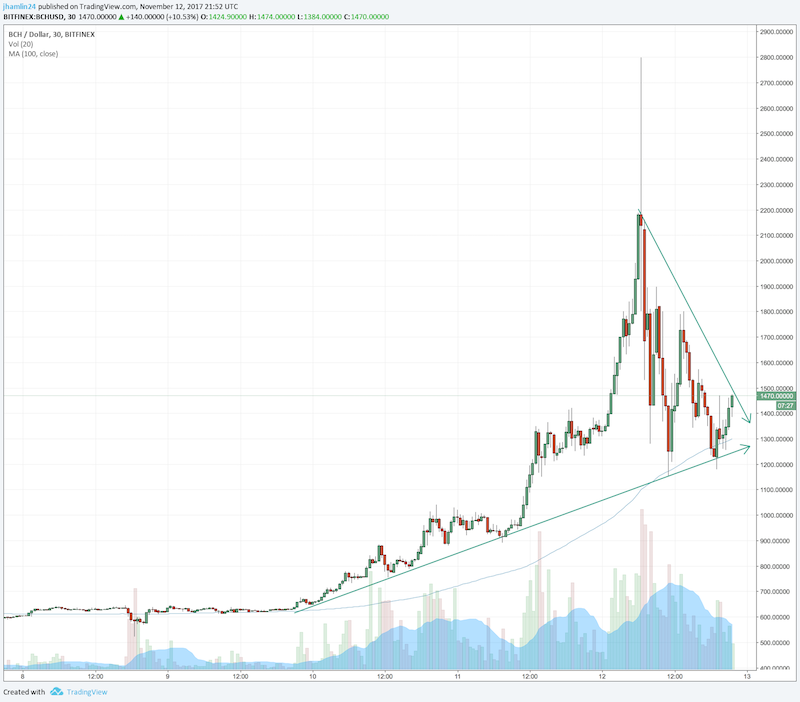 Another potential reason for the Bitcoin Cash pump is an upcoming fork of BCH. Some investors are expecting free coins from the fork as they received when Bitcoin Cash forked from Bitcoin Core. But this is really just a feature upgrade which will attempt to reverse the emergency difficulty adjustment (EDA) rule.

I did not buy the rally and argued against what I viewed as a ridiculous valuation for Bitcoin Cash. I don’t deny the scalability issues plaguing Bitcoin at the moment, but Bitcoin Cash is a solution in search of problem. Why?

The valuation briefly eclipsed that of Ethereum, a company that does offer true innovation as the first and largest smart-contract platform on the blockchain. There is a reason that hundreds of new companies have chose to run on their ERC20 platform. Ethereum has some of the top coders working on the project, is quickly improving their technology and is expected to soon be able to offer more transactions per second than Visa, has implemented private transactions via ZK-Snarks and has continually been at the forefront of cutting edge technology. 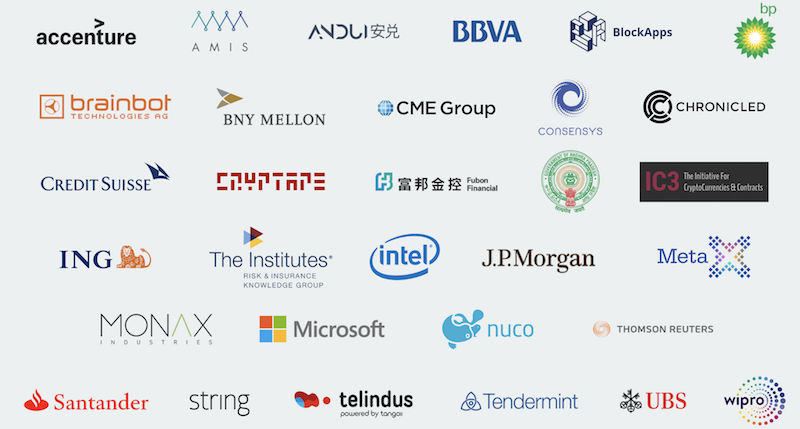 Yet, promoters of Bitcoin Cash have managed to convince investors that it should be valued similar to Ethereum. And unfortunately for those investors, the price of Bitcoin Cash rapidly crashed from $2,450 to just $1,200 over the past 24 hours, for a decline of more than 50%.

I have no issue with new cryptocurrencies forking  and trying to compete in the market. But Bitcoin Cash co-opted the Bitcoin name and is claiming to be the Bitcoin, pushing forward without the support of the core developers that have brought Bitcoin to the place it is today, along with a $200 billion market valuation.

While Bitcoin Cash does offer faster/cheaper transactions at the current time, this is likely not sustainable over time as the BCH blockchain grows. Since they don’t offer second layer solutions, this will eventually become an issue for Bitcoin Cash, while the Bitcoin Core will be able to scale with Segwit and Lightning solutions.

But as mentioned, there really is no reason for Bitcoin Cash to exist. Several cryptocurrencies that are trusted and have been around longer, already offer near immediate and zero cost transactions. Dash has released a new software upgrade that cuts transaction cost to near zero, while doubling network capacity. The release of 12.2 of the Dash Core software comes with new features, improvements and bug fixes, the organization announced earlier this week. 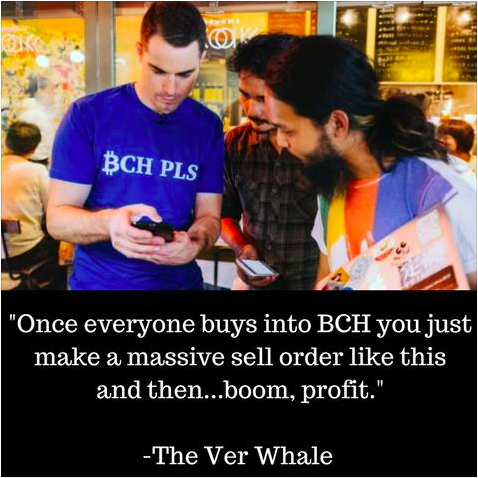 Bitcoin Cash is being pushed primarily by miners that are able to use the ASIC exploit to their advantage. Bitmain in particular would prefer to see larger blocks that keep the ASIC exploit in order to be more profitable. The preserving of this exploit that the Chinese miners have invested so much money into is a key feature of Bitcoin Cash as it keeps their advantage alive. Segwit stops this advantage, which explains why they are so hostile towards Layer 2 scaling solutions.

Furthermore, there is evidence that a larger percentage of the volume occurring during the latest Bitcoin Cash pump was coming from Korean exchanges. Not only was the volume higher than usual, but there was also a significant price premium.

With the miners owning so much of BCH, some have speculated that they are able to manipulate the price artificially and have either created or exasperated the price rise over the past few days. In fact, there was an anonymous miner that kept BCH alive by continuing to mine the coin even when mining Bitcoin was up to 50% more profitable.

Roger Ver and Jihan Wu are two of the major promoters of Bitcoin Cash and I believe they are attempting to convince Bitcoin holders to dump in favor of Bitcoin Cash. There may be philosophical difference in how the two groups see Bitcoin, but this ultimately smells like a simple cash grab and engineered dip. Bitcoin Cash is likely a backup plan for those that supported B2x and they are desperate to pump a takeover coin that they can control.

Roger Ver told Forbes via email that he is selling his Bitcoin for Bitcoin Cash:

“Bitcoin Cash is useful in commerce, and therefore can also be used as a store of value,” he wrote, referring indirectly to the high transaction fees on Bitcoin; Bitcoin Cash has much lower fees. When asked if he was trying to move the price, he said, “Of course not. No trader ever wants to be the one to move the price.”

Another big proponent of Bitcoin Cash, Jihan Wu, the CEO of Bitcoin mining equipment manufacturer Bitmain and mining pool Antpool, wrote via WeChat, “Right now we have both BCH and BTC, but we believe BCH has more potential.” He denied that he or his companies sold Bitcoin for Bitcoin Cash on Friday or Saturday during the price gyrations.

As Charlie Lee, creator of Litecoin put it:

I think because miners need a coin to keep mining using Asicboost. They managed to fool the BCH supporters with their SegShit FUD. Without SegWit, it will never get future tech upgrades like LN, Schnorr, etc. No way it can compete with BTC or LTC.

I believe that if the market was left to decide for itself, we would not be seeing this huge pump in price absent major news. The whole price pump does not seem natural to me, particularly because other coins offer excellent capabilities for fast and cheap transactions, but with better technology and developers. Can anyone really make a solid argument for not using Segregated Witness (Segwit) to scale? Why does BCH refuse to use it?

Bitcoin Cash has become significantly more profitable to mine than Bitcoin, stealing has power from BTC. This is increasing the transaction time and costs for Bitcoin transactions. This could take several weeks to correct, as the profitability for mining BCH drops and miners shift back to mining BTC.

In Satoshi’s vision, many believe Bitcoin was never meant to be a full-blown currency or transaction layer. Bitcoin is a value layer or wealth storage layer and it serves this purpose very well. Sidechains will provide the functionality for fast and low-cost transactions and this tech is on the way.

On the other hand, Satoshi Nakamoto’s confidant Gavin Andresen has said that he support Bitcoin Cash. He recently said: “Bitcoin Cash is what I started working on in 2010: a store of value and means of exchange.”

Summary of Why I am Not Buying Bitcoin Cash

We are in unchartered territory with new technology and new forms of money carving out their place in history. It is undoubtedly an exciting time to be alive. However, I don’t believe that the rise in the price of Bitcoin Cash can be sustained. I think it is being driven by self-serving miners colluding with Asian exchanges and a disaffected group that did not get the SegWit2x fork that they wanted.

While it is true that Bitcoin is facing scaling issues, it has still proven to be an excellent store of value and has provided some of the best returns of any investment in history. Those looking for a cryptocurrency focused on lower transaction costs have several viable options without forking Bitcoin, stealing the name and trying to convince investors it will be the final version of Bitcoin.

I believe that the current scaling issues will be solved in the near term and are better addressed via Layer 2 solutions than by increasing the block size to 8MB. So, I am keeping the majority of my funds in Bitcoin (BTC) and buying the current dip below $6,000. I am not jumping on the Bitcoin Cash (BCH) bandwagon and while the coin is likely to survive, I don’t believe that it deserves a valuation anywhere near that of Bitcoin, let alone Ethereum.

Sign up here to get our top cryptocurrency picks, in-depth research, ICO tracker and monthly newsletter.