Will Ron Paul End the Fed? 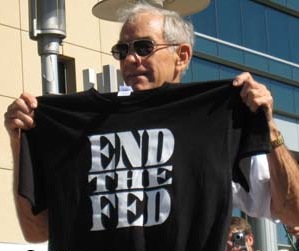 Is Ron Paul finally in position to really do something about the Federal Reserve? U.S. Representative Spencer Bachus, the chairman-elect of the House Financial Services Committee, has announced that Ron Paul will chair the domestic monetary policy subcommittee starting next month. This puts Ron Paul in tremendous position to be able to put significant pressure on the Federal Reserve. In previous years Ron Paul has introduced legislation to end the Federal Reserve but it never got any traction. During this most recent session of Congress an effort by Ron Paul to have a full audit of the Federal Reserve conducted gathered quite a bit of momentum for a while, but in the end it did not get passed. However, a very limited examination of Fed activities during the recent financial crisis was passed, and that examination has revealed some really shocking things. With so many Tea Party members entering Congress this upcoming session there may be more momentum than ever to hold the Federal Reserve more accountable. Ron Paul is already talking about how he is planning for a full slate of hearings on U.S. monetary policy and he has indicated that he plans to restart a push to have the Fed audited.

And why shouldn’t the Federal Reserve be fully audited? The Federal Reserve has more power over the U.S. economy than any other institution and yet it has not been subjected to a comprehensive audit since it was created back in 1913.

So what would an audit accomplish?

Well, it would hopefully expose what is going on inside the Federal Reserve.

A very, very limited examination of Fed transactions that occurred during the recent financial crisis forced the Federal Reserve to reveal the details of 21,000 transactions stretching from December 2007 to July 2010 that totaled more than 3 trillion dollars. It turns out that the Federal Reserve was just handing out gigantic piles of nearly interest-free cash to their friends at the largest banks, financial institutions and corporations all over the globe.

These revelations have many members of Congress wondering what else has been going on inside the Federal Reserve.

For example, U.S. Senator Bernie Sanders was absolutely outraged by these “backdoor bailouts” by the Federal Reserve….

“The $700 billion Wall Street bailout turned out to be pocket change compared to trillions and trillions of dollars in near zero interest loans and other financial arrangements that the Federal Reserve doled out to every major financial institution.”

More members of Congress than at any other time in recent memory are openly wondering if it is now time “to pull back the curtain” at the Federal Reserve. For those who would like to see the power of the Federal Reserve greatly diminished, there should be one primary goal right now.

The truth is that the more the American people learn about the Federal Reserve and about what it has been doing the more they disapprove.

During his farewell speech on the floor of the U.S. Senate this week, Senator Jim Bunning noted that as the American people become increasingly aware of what the Federal Reserve is doing the less they like it….

“Public awareness of what the Fed is doing is increasing while public opinion of the Fed is falling.”

Unfortunately, the views of Ron Paul and other anti-Federal Reserve members of the Tea Party movement are strongly opposed by many other members of the Republican Party.

In a recent Bloomberg Television interview, Barney Frank noted this division within the ranks of the Republicans….

“I do not believe that Ron Paul’s views on the Fed represent the views of most Republicans.”

However, there is evidence that the tide is turning with the American public.

According to a recent Bloomberg National Poll, the number of Americans that would like to see the Federal Reserve held more accountable or even completely abolished is increasing….

Those are very exciting numbers. A majority of Americans now want the power of the Federal Reserve to be reduced or they want it shut down entirely.

If Ron Paul is able to get a comprehensive audit of the Federal Reserve passed, the revelations that would come out of that would certainly turn public opinion against the Fed even more.

So what is so bad about the Federal Reserve?

Well, think of it as a perpetual debt machine.

Did you know that the U.S. national debt is 5,000 times larger than it was a hundred years ago?

That’s right – back in 1910, prior to the passage of the Federal Reserve Act, the national debt was only about $2.6 billion.

Since that time, our debt has been endlessly skyrocketing.

The way our system works, whenever the U.S. government arranges for the Federal Reserve to issue more currency, more government debt is created at the same time. In fact, as I have written about previously, all of our money is now based on debt.

No debt, no money.

What we desperately need is for the current monetary system to be scrapped. The federal government should take back the power to issue currency and should implement a new system based on money that is debt-free.

The truth is that it is insane that any sovereign government should have to go into debt just to produce more of its own currency.

Since the Federal Reserve was created in 1913, the U.S. dollar has lost over 95 percent of its purchasing power. This continual debasement of our currency is called “inflation” and it is a hidden tax on every man, woman and child in the United States.

It is absolutely guaranteed that every single dollar that you own will go down in value over the long-term.

But the American people have come to accept that a constantly expanding national debt and a currency that is constantly losing value is the most “rational” economic system that humanity has ever come up with.

So who benefits from all this?

Well, for fiscal year 2010 the U.S. government paid out over 413 billion dollars in interest on the national debt. In future years that number is projected to rapidly skyrocket even more.

Wouldn’t you like to be getting a nice chunk of that 413 billion dollars?

It turns out that loaning money to the U.S. government is very, very profitable.

So what did we get in return for our 413 billion dollars?

Sadly, this is not just going on in the United States. This is going on literally in almost every nation on earth.

All over the world sovereign governments are drowning in debt and so they have to drain their citizens dry so that they can meet their obligations.

In the book of Proverbs, it tells us that “the rich ruleth over the poor, and the borrower is servant to the lender.” Americans like to think that they live in “the land of the free”, but the truth is that we have become enslaved to debt.

But even worse, we have consigned our children and our grandchildren to a lifetime of debt. They will have to work all of their lives to pay trillions of dollars in interest on all of the debt that we have accumulated in this generation.

How would you like to be born into a world where the previous generation had racked up a $13 trillion debt that now you were expected to pay off?

There is a reason why people like Ron Paul are so obsessed with the Federal Reserve. It is not because they don’t have anything better to do. It is because the future of our country literally hangs in the balance.

Throughout American history, presidents, top members of Congress and leading business people have warned us about the dangers of having a central bank. In fact, even though our young people are no longer taught this, the debate over central banking was one of the most important themes in early American history.

But we didn’t listen to the warnings.

We were convinced that we knew better.

Well, now we have an economic system that is dying and a $13 trillion debt that we are passing along to our children and to our grandchildren.

Perhaps we were not as smart as we thought we were.

Make sure to sign up for the Gold Stock Bull contrarian newsletter in which I provide research on undervalued junior miners, a summary of the month’s economic news, real time access to the GSB portfolio, email trade alerts with specific buy/sell signals and much more.

The portfolio returned 133% last year and is up over 50% this year. Our last two silver junior mining picks doubled in value over the past few months. The membership should really pay for itself many times over.

Start your 1-month trial for just $35 by clicking here!